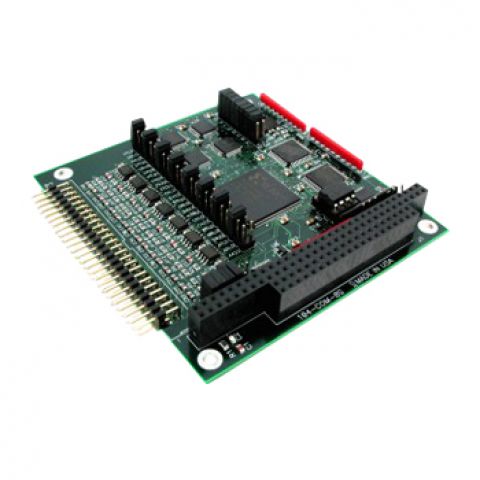 These are eight, four, or two-port, asynchronous, serial communication boards designed for use on the PC/104 bus. They support RS-485 and RS-422 communications. The boards may be installed in any standard PC/104 stack. Connections are made via a 50 pin IDC type right angle connector. Common applications include POS, gaming systems, machine monitoring, military and highdensity networking. Type 16550 UARTS are used as the asynchronous communication elements. These include 16-byte transmit/receive FIFO buffers to protect against lost data in multitasking systems while maintaining 100% compatibility with the original IBM serial port. A crystal oscillator located on the board permits precise baud rate capability up to 115,200. Higher speeds, up to 921.6K, are achieved by installing a jumper on the board. The driver/receivers used, type SN75176, are capable of driving long communication lines at high baud rates. They can drive up to ±60 mA on balanced lines and receive inputs as low as 200 mV differential signal superimposed on common mode noise of +12 to -7V. In case of communication conflict, the driver/receivers feature thermal shutdown. This board may be operated in two modes. In the Default Mode, the base address for the board is selected by jumpers and all of the channel addresses are sequential. Because it is sometimes difficult to find a large enough block of addresses to permit this approach, an alternative is provided. The addresses and interrupts of the individual channels may be stored in non volatile memory on the board and loaded into programmed logic when the board is initially powered. Individual interrupts for each channel are programmed into the non-volatile memory in both modes.